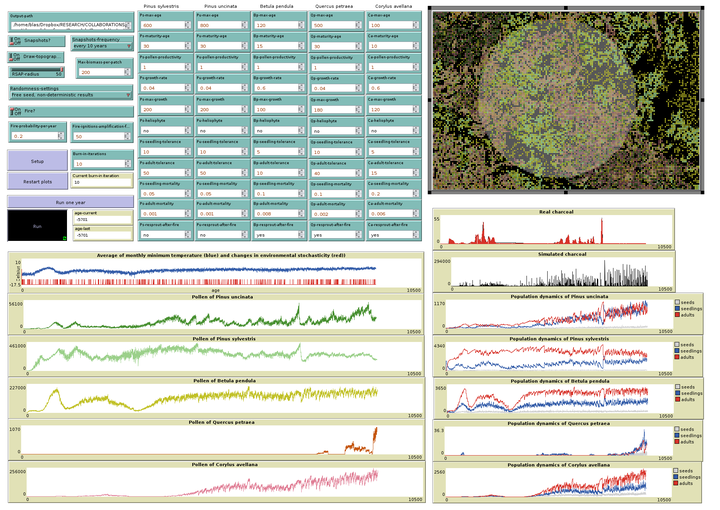 Interface of the simulation

A short description of the project was presented by Graciela Gil-Romera at the 1st Quaternary Palaeoecology Twitter Conference.

HOW DOES IT WORK

The abiotic layer of the model is represented by three main environmental factors:

The biotic layer of the model is composed by five tree species. We have introduced the following elements to represent their ecological dynamics:

The model doesn’t simulate the entire populations of the target species. Instead, on each 200 x 200 meters patch it simulates the dynamics of an small forest plot (around 10 x 10 meters) where a maximum of one individual per species can exist.

Let’s burn it! Simulating fire-vegetation dynamics at millennial timescales in the central Pyrenees. from blas benito on Vimeo.

The life of an individual

During the model setup seeds of every species are created on every patch. From there, every seed will go through the following steps every simulated year:

These steps continue while the individual is still a seedling, but once it reaches its maturity some steps become slightly different:

The user defines the radius of a catchment area round the core location (10 km by default, that is 50 patches). All patches within this radius define the RSAP (relevant source area of pollen).

At the end of every simulated year the pollen productivity of every adult of each species within the RSAP is summed, and this value is used to compose the simulated pollen curves. The same is done with the biomass of the burned individuals to compose the virtual charcoal curve.

The simulation GUI shows the following results in real time:

The simulated pollen counts and charcoal is exported to the path defined by the user as a table in csv format named output_table.csv. It contains one row per simulated year and the following columns:

HOW TO USE IT

Input files are stored in a folder named “data”. These are:

General configuration of the simulation

The user can set-up the following parameters throught the GUI controls.

Each species has a set of traits to be filled by the user. Note that a particular species can be removed from the simulation by switching it to “off”.